See what the MFS does when they’re out and about in our community. Here we share interesting snippets of our personnel at work and some highlights of our more recent events.

The pair presented RAP to schools and businesses in Cleve, Port Lincoln and Tumby Bay. Local MFS and CFS firefighters and SES personnel also attended some of the school visits.

RAP focuses on the role of all road users, encouraging and empowering students to speak up against selfish behaviours. An integral feature of RAP includes emotional presentations from road crash survivors who implore the students to learn from their experience.

Yudhi was T-boned whilst on his motorbike, leaving him in a coma for 46 days with a 10% chance of survival. His injuries prevent him from working full time so he instead spends his time volunteering.

He is determined to focus on educating young drivers through the MFS RAP.

His presentation highlights that taking just one risk on the road can have major consequences.

Josh and Yudhi were both extremely impressed by the engagement level shown by students. The pair would like to thank staff and students from Cleve Area School, Port Lincoln High School, St Joseph's School, Navigator College, Tumby Bay Area School. The MFS looks forward to seeing you again next year!

The program is funded by the State Government and is generously supported by sponsors the RAA, Think! Road Safety, the Australian Professional Firefighters Foundation (APFF) charity and SA Power Networks (SAPN). 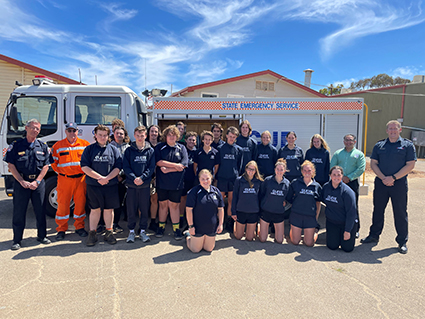 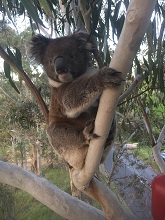 In November, the Metropolitan Fire Service (MFS), assisted by the Country Fire Service (CFS) and Adelaide Koala Rescue, rescued an injured koala from a tree in Stirling.

People traveling in the area saw the koala fall as the high branch it was perched on broke.

The koala lay motionless on the ground for some time before witnesses saw him gingerly get up and climb back up the tree.

Concerned onlookers contacted the CFS and Adelaide Koala Rescue, who then requested the assistance of MFS aerial appliance 2015 (the Bronto).

A spokeswoman from Adelaide Koala Rescue explained that when she approached the koala he appeared agitated and kept grabbing at his back leg.

“He was also flicking his ears, which is a common indicator that they are in pain,” she continued.

MFS Station Officer Scott Rogers, who assisted with the aerial rescue, was given the opportunity to name the koala, resulting in the cuddly looking creature being called Max.

Max the koala was taken into care but luckily x-rays didn’t show any signs of breaks or dislocations. He does however have soft tissue damage to his back leg and is receiving treatment. With a little further rehab Max will be released back into the wild. 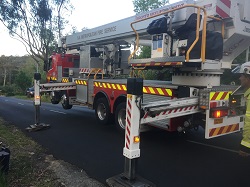 A spokeswoman from Adelaide Koala Rescue explained that just because a koala is in a tree, it doesn’t mean they are ok.

“If a Koala has been injured, such as being hit by a car, they could still make their way back up a tree due to the adrenalin pumping through their bodies.”

She added, “It’s always important to get them assessed to ensure their safety and wellbeing. If in doubt, call us out!”

The MFS was notified by 000 (Triple Zero) call of a fire in the Chinatown area near Grote Street in Adelaide at about 1.05 am.

MFS firefighters arrived shortly after to find an intense fire in a shop that was burning through the roof and rapidly spreading to neighbouring shops. Crews quickly upgraded to a second, third and then fourth alarm to seek further resources.

At the height of the incident, 75 MFS firefighters from 16 appliances and five support vehicles battled the blaze, containing the fire within one hour. An aerial fire appliance (truck) was used by firefighters to observe the fire from above.

“Due to the intensity of the fire and its rapid spread, there were three shops significantly impacted by the fire. However, the quick work of firefighters has saved several neighbouring shops from the blaze,” MFS Deputy Chief Officer Michael Morgan said.

An Advice message was issued during the blaze to notify the public of smoke travelling across Adelaide. Wind conditions were favourable meaning the impact of smoke was minimal.

MFS Deputy Chief Officer Michael Morgan attended the blaze overnight and said the MFS was supported by several agencies throughout the night.

“SA Ambulance Service (SAAS) paramedics monitored the health of firefighters throughout the incident, while SAPOL officers assisted by conducting interviews and preserving the scene.”

“Due to the number of MFS crews at the fire, Country Fire Service (CFS) firefighters provided back-up at MFS stations, which is known as ‘change of quarters’ to ensure emergency response capability across Adelaide was maintained overnight. Thank you to all agencies for their support.”

MFS and SAPOL Fire Cause Investigators have worked to determine the fire’s cause and assess the extent of damage. Damage is estimated at $1.5 m within a complex valued at up to $4 m.

In all, the fire gutted two shops (a supermarket and a restaurant), while a third business that sold shoes and clothing was also heavily fire damaged.

The Chinatown fire was fully extinguished about five hours after it first began, with MFS firefighters remaining on scene throughout the morning to clean up the area and support investigators. The fire’s cause is believed to be accidental.

A long-serving MFS Station Officer and his daughter have become MFS firefighter colleagues. 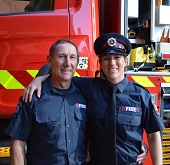 SO Graham Lynch, a 34-year MFS firefighter, proudly welcomed daughter Samantha as a new colleague when she graduated along with 17 other new full-time recruit firefighters.

“Samantha and her fellow recruits have contested a field of 2,200 people for the opportunity to complete a demanding 14-week training course and reach graduation. I’m thrilled for her that she’s realised her dream - and very proud,” SO Lynch said.

Recruit firefighter Samantha Lynch said growing up with a firefighter as a parent proved a huge inspiration for her.

Joining Drill Squad 49 has been one of the most incredible experiences of my life.”

“My father’s love of his job and commitment to community safety cemented my desire to follow in his footsteps. 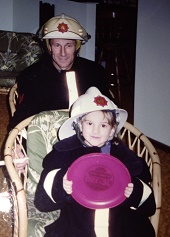 “As recruit firefighters, we’re all looking forward to serving the community as we go on shift for the first time across Metropolitan Adelaide and regional South Australia.”

One recruit returned from active duty with the Royal Australian Air Force in the Middle East three days prior to joining the 14-week MFS recruit training course.

Other graduates include a Retained (part-time) MFS firefighter from Pt Pirie and the Riverland, CFS volunteers, a surf lifesaver and members of the Australian Navy and Army.

Each recruit firefighter has completed more than 700 hours of challenging physical training and attended in excess of 100 lectures.

“The MFS launched its first diversity in recruitment campaign a year ago – and we remain committed to diversifying, so that our workforce increasingly reflects the community we serve.”

“I encourage people who want to give back to the community, work as part of a team, think on their feet, solve problems under pressure, interact with people from different backgrounds and cultures, pursue further study and keep fit and healthy – to apply when applications next open,” MFS Chief Officer Crossman said.

Each recruit firefighter has the opportunity to develop their career at the MFS in various areas, including operations, community education, engineering, built environs, training, fire cause investigation, triple zero communications, management, Urban Search and Rescue (USAR) and Hazmat.

Two South Australian fire trucks have arrived for duty at Tonga Fire and Emergency Services (TFES), thanks to a 14 year alliance with the Metropolitan Fire Service (MFS).

They’re the 21st and 22nd fire trucks that the MFS has arranged to donate to the Pacific Island nation of Tonga’s fire service since 2004.

The latest trucks are MFS and Country Fire Service (CFS) water carriers that are more than 25 years old and have been painstakingly restored.

The donation was made possible due to a long-term partnership between the MFS and TFES that began more than a decade ago.

A long term partnership forged after 2003 visit to Tonga

MFS firefighters first visited the Kingdom of Tonga in 2003 and were concerned by the realities at the time.

Tongan firefighters would respond to emergencies without helmets, gloves, boots or breathing apparatus, while only four deteriorating firefighting jackets were available between 50 personnel.

In 2004, a supportive partnership was formed between the MFS and TFES with the signing of a Memorandum of Understanding (MoU).

The alliance has led to the exchange of personnel, information, educational materials, training and equipment over many years and TFES has become greatly respected within the community.

The latest restored fire trucks to be donated are former MFS and CFS appliances that had reached the end of their service life in SA and arrived in Tonga in June.

Both the TFES and MFS are pleased that their alliance remains strong today, so many years after it first began.

Every TFES firefighter who goes on shift now has a protective helmet, set of gloves, pair of boots and fire rated jackets and pants, meaning a great improvement in firefighter safety.

“These MFS and CFS water tankers have been gratefully received by the TFES.

The trucks provide Tongan firefighters with greater capacity to transport water to emergency incidents and attack fires rapidly on arrival, leading to a reduction in fire damage and economic loss.

“Shipping costs for their journey to Tonga have been kindly covered by the Tongan government,” he said.