In 1913 the title of Superintendent of Fire Brigades was changed to Chief Officer.

Consistent with the Act coming into law, and the appointment of the inaugural Superintendent, 1862 is recognised as the year in which the South Australian Metropolitan Fire Service (formally South Australian Fire Brigade) was established.

The tragic loss of life resulting from the fire on cargo steamer “City of Singapore” remains the MFS’s darkest day, yet it represents a pivotal moment in the history of the South Australian Fire Brigade as it entered an era of modernisation and change. We will never forget the selfless bravery, dedication and courage that our firefighters exhibited on that day to protect the South Australian community, which will forever inspire us in our devotion to duty.

On Saturday, 26 April 1924, the cargo steamer “City of Singapore” was docked at No. 2 Quay, Port Adelaide. The steel vessel was loaded with a shipment of cars, tractors, kerosene, lubricating oil and 38,000 cases of petrol.

At approximately 7.45pm a small explosion occurred on the vessel due to spontaneous combustion, resulting in the quick spread of fire. The Port Adelaide and Semaphore Fire Brigades, supported by the fire float Ada attended the blaze, however the local fire brigades were not equipped to deal with such a disaster.

The Chief Officer at the Head Fire Station in Adelaide called the men together for a formal group announcement (parade) and told them that he wanted volunteers to attend the fire. Every fireman volunteered to attend. 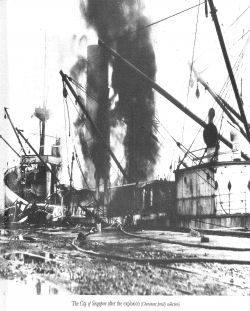 At around 10.30pm the fire appeared to have been extinguished, however approximately 20 minutes later a rumbling was heard from the No. 4 hold and the call went out to abandon ship. Two explosions followed, sending debris flying through the air for hundreds of metres. The explosion was so severe that it rattled windows and doors as far away as the foothills, and many residents thought there had been a severe earthquake.

As a result of this blast, three firemen were killed and thirteen others injured.

On Thursday 26 April 2012, the South Australian Metropolitan Fire Service (MFS) launched a six month period of celebrations to mark its 150th year of serving South Australia, making it one of the oldest legislated (government) fire services in the world.

26 April is a significant date in the Metropolitan Fire Service´s history. The day marked 88 years since its firefighters bravely fought the City of Singapore fire, what is considered to be Port Adelaide´s largest vessel fire.

Several of the State's firefighter memorials were refurbished and unveiled, including Fireman Gardner's Drinking Fountain at Elder Park and the Emergency Services Memorial at Centennial Park.

On Monday, 5 November, 2012 to commemorate the official date that the South Australian Metropolitan Fire Service was formed, the Wall of Remembrance at Adelaide Station was unveiled.

While this anniversary was cause for celebration, it was also a timely opportunity to remember the 10 MFS firefighters who have lost their lives in the line of duty. 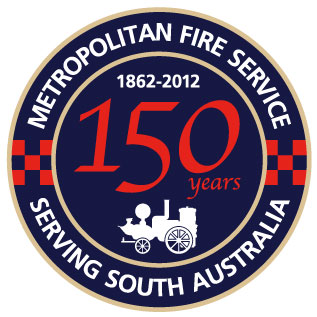