In South Australia, legislation is in place to make domestic smoke alarms compulsory for all residential buildings. In some situations the smoke alarms need to be interconnected. See “Interconnecting smoke alarms” below.

Home owners are required, by Regulation 76B under the Development Act 1993, to install battery powered or hard-wired (240 volt mains powered) smoke alarms*.

In rented homes the owner of the property is responsible for the installation of working smoke alarms and must ensure that they are maintained. The minimum maintenance required under Australian Standard 1851 – 2012 is detailed in the SA Metropolitan Fire Service (MFS) Home Fire Safety fact sheet Smoke Alarm Servicing Schedule. This schedule, appropriately signed and dated, can be kept as a record of maintenance. The MFS recommends a more rigorous maintenance regime (see below “Maintenance of Smoke Alarms”) and suggests that more frequent maintenance instructions and responsibilities are included in leasing agreements as the responsibility of the tenant.

Why do you need a smoke alarm?

Smoke obscures vision and causes intense irritation to the eyes. This, combined with the effects of the poisons in the smoke, can cause disorientation, impaired judgement and panic, reducing the victim’s ability to find an exit.

Most fire-related deaths result from the inhalation of toxic fire gases rather than from direct contact with flame or exposure to heat.

Correctly located smoke alarms in your home give early warning of fire, providing you with the precious time which may be vital to your survival.

The installation of smoke alarms forms one part of a Home Fire Escape Plan.

It is vitally important that every family has a complete Home Fire Escape Plan which is practised and understood by all occupants.

Advice on the development of a Home Fire Escape Plan is available from the MFS by telephoning 8204 3611 or visiting our website www.mfs.sa.gov.au.

Ionisation smoke alarms detect small diameter smoke particles, the invisible products of combustion, and are most effective in the case of flaming fires. They are not suitable for locations affected by cooking, combustion heating appliances or open fires.

Photo-electric smoke alarms detect larger smoke particles, the visible products of combustion, and are most effective in the case of smouldering fires. They are suitable for installation near kitchens or in areas containing combustion heaters or open fires.

Research indicates that photo-electric alarms provide the best detection across a range of fires.

The MFS recommends that the best protection is provided by photo-electric smoke alarms which are hard-wired to the 240-volt power supply and interconnected to give the earliest warning possible.

From 1 May 2014 multiple smoke alarms must be interconnected in all new Class 1 and Class 2 buildings and in any new extensions to buildings which require more than one alarm.

Regardless of when your house was built, the MFS recommends that if you have multiple smoke alarms they should be interconnected. Both the ionisation and the photo-electric types of smoke alarm are available as interconnectable alarms.

For assurance of quality in manufacture, the MFS recommends that you buy smoke alarms which comply with Australian Standard 3786.

Look for ‘AS 3786’ and/or the Standards Australia ‘five ticks’ symbol on the packaging. (Pictured below)

In a large domestic dwelling, it is advantageous to have the domestic smoke alarms interfaced to a Residential Fire Alarm Indicator Panel. The occupants, and the fire service on their arrival, will then know exactly where the fire has been detected in the house.

Note: Residential alarms may only be used where the Building Code of Australia does not call for an Australian Standard 1670 system.

For those who are deaf or hard of hearing, there are smoke alarm systems available that incorporate strobe lights and vibrating elements in addition to the audible alert signal.

If you are dependent on others for movement (e.g. paraplegic), a smoke alarm system may be interfaced with equipment that will send a pre-recorded message or signal to the service provider so that the fire service and a designated carer can be immediately notified to respond.

Interfaced with Domestic Security System - Some smoke alarms are connected via a domestic security system. It is critical that the smoke alarms in such a system are AS 3786 compliant.

Battery-powered alarms may be installed by the householder, carefully following the manufacturer’s instructions.

Australian Standard 1851-2012 recommends a minimum standard for maintenance procedures. The MFS recommends more frequent maintenance in some instances to ensure that smoke alarms operate at their maximum efficiency.

Change the battery once a year or if a ‘battery low’ warning ‘beep’ is emitted. Ensure that the appropriate battery is used for the smoke alarm you have installed. (Refer to the manufacturer’s instructions.)

It is strongly recommended that batteries are changed each year. An ideal time to do this is when you change your clocks back at the end of daylight saving.

Remember: Hard-wired (240-volt) smoke alarms may also have backup batteries which must be changed regularly.

Press the test button once a month, and when you return from an extended absence, to ensure that the smoke alarm is working. Test the backup battery of a hard-wired (240 volt) alarm by isolating the power supply (main switch or circuit breaker) before pushing the test button.

To test the alarms which are connected to a security system, refer to the owner instruction manual or follow the testing advice which is displayed on the control panel.

At least every six months, remove dust, lint or cobwebs from the outside of the alarm using the soft brush attachment of your vacuum cleaner. Any other cleaning should be done in accordance with the manufacturer’s instructions.

Test the alarm after cleaning.

All smoke alarms that comply with AS 3786 have a recommended service life of 10 years under normal operating conditions. After that time smoke alarms may malfunction and their efficiency may be compromised with accumulated dust, insects, airborne contaminants and corrosion of electrical circuitry. They should be replaced at least every 10 years. The MFS strongly recommends they should be replaced with hard wired, interconnected (240v) photo-electric smoke alarms.

If you have a passageway leading to the bedrooms install the alarm at the end closer to the living area.

If you sleep with your bedroom doors closed the MFS recommends additional alarms in the bedrooms, interconnected with those located in passageways and other parts of the dwelling, to ensure that you are alerted by the activation of any alarm.

If there is no passageway but the bedrooms are accessed directly from the living area, install the alarm outside each bedroom 900mm from the doorway.

For additional protection, also install alarms in each bedroom. Install them as close as practicable to the centre of the room and interconnect them with the alarms located in other parts of the dwelling.

Consider the installation of photo-electric alarms in the living area to reduce the incidence of nuisance alarms. 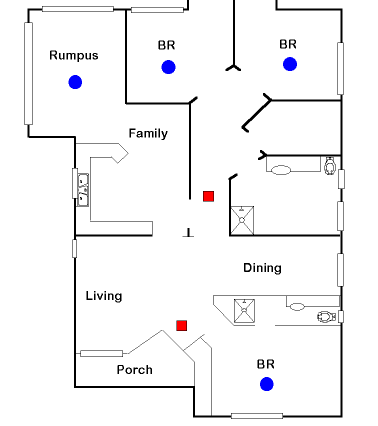 If there are bedrooms at both ends of the house install interconnected alarms in the passageway to each of these areas.

In passageways, the installation point should be at the end closest to the living area and certainly before the first bedroom is reached so that when the alarm sounds, there will be sufficient time to allow evacuation by normal exit routes e.g. doors.

If you have two or more storeys, smoke alarms should be installed on each level and the MFS recommends that they be interconnected.

Corners between walls, between a wall and ceiling and at the apex of a sloping ceiling contain dead air space which smoke may not readily penetrate.

Alarms placed in these spaces may not activate.

On a sloping ceiling the alarm should be installed between 500 and 1500mm down the slope from the apex. 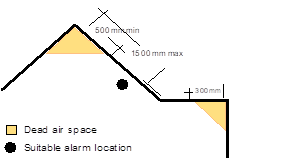 If a flat or sloping ceiling has closely spaced exposed beams the areas in between the beams should be considered as dead air space and the alarm should be attached to the bottom of a beam.

Note: The MFS does not recommend side wall installation.

The MFS recommends that factors such as ducted air conditioning systems may require additional interconnected smoke alarms to be installed.

Want more information on which is the right smoke alarm for your home?